How to Play Backgammon

A traditional game dating back centuries with entertainment like none other. Backgammon is a game for 2, played upon 24 triangle which are called backgammon points. The points take on two colour shades, each colour allocated to one opponent.  The line of triangles alternate between a darker and lighter point. As seen below these backgammon points are split up into 4 quadrants, each quadrants containing 6 backgammon points, 3 of each colour. The quadrants are seperated in the centre by the bar. As visible from the image below, the aim of the game is to bear of the most points off the backgammon board. 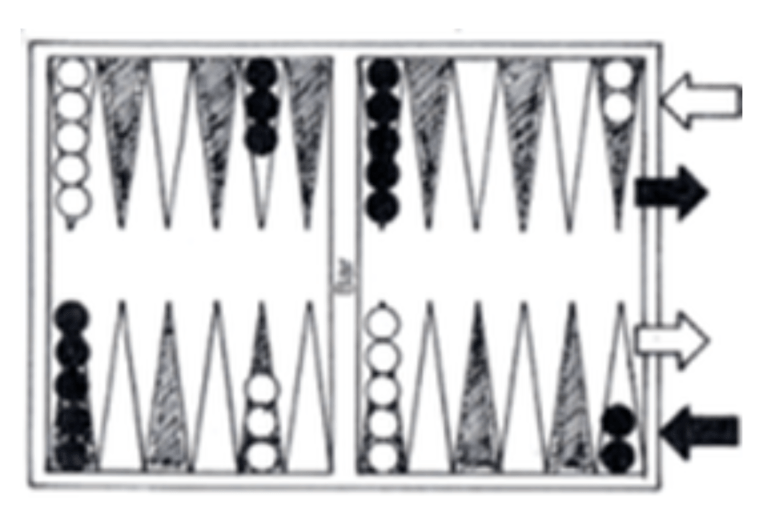 · Backgammon Board with 24 points.

· 15 Backgammon pieces of each colour

Aim: The aim to bring home all your 15 backgammon pieces home and bear them off the board. 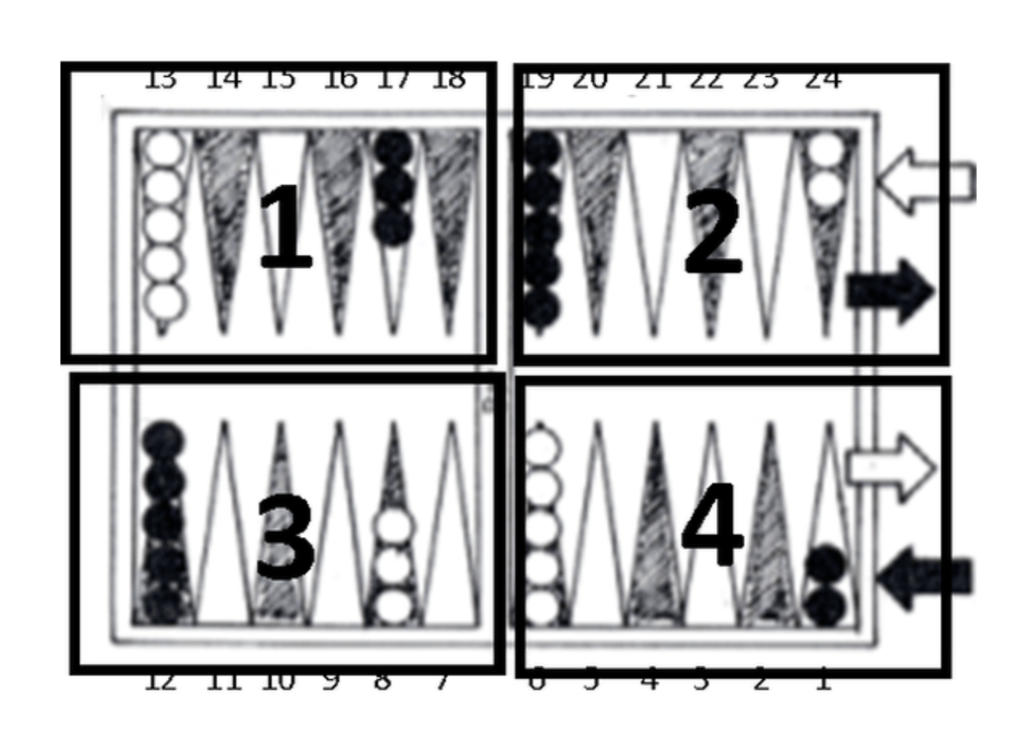 Backgammon is a 2 player game and these 2 players sit on opposite sides of the board.

Each player has their home board to their right hand side. You will be moving your backgammon pieces from the oppositions home board(2) to your home board(4) moving in a anticlockwise direction as summarised above by the arrows:

Where can the Piece be moved?

Rules: Backgammon Piece, how many pieces to move in relation to dice numbers?

Dices must be rolled into the right hand side of the board.

In any of these instances both dice should be rolled again.

Any player who rolls doubles(6 and 6), They will have the option of x4 of 6 point moves and may play any backgammon piece or combination they wish to.

The player is required to use both number of dice rolled. If only 1 number can be played, this should go ahead. In cases where both dice numbers cannot be played, the player loses their turn.

A single backgammon piece occupied by the opposition on a point is called a blot. In any case this blot is hit, this will take it’s place on the bar

Once this blot has been placed on to the bar, the blot has to restart again and can resume it’s place on the opposition board as soon as the dice has been rolled.

Again once rolled and the blot can not be moved to any point with either of the dice rolled, the player misses their turn.

Any un-used numbers on the dice will need to be used.

Bearing off occurs once the player has moved all their backgammon pieces into their home board. The pieces are beared off depending the dice number rolled.

Backgammon is a game of stakes, A player can change the stakes of the game before their turned at any point during the game.

A backgammon game is played for an agreed stake for each point.

A player will propose to double the stakes if they feel they are at an advantage of winning the game. The opponent in this case can decide to reject this idea and concede the game for the point to you. However if they decide not to reject they will continue to play the game at a higher stake.

The player who agrees to the double will now be the owner of doubling dice for the next stake. Any further doubles are called redoubles. If a player refuse a redouble he must concede the point prior to the redouble. This now means the agreed player owns the doubling dice and will not decide the next redouble.

The doubling dice is not a dice to be played with but rather a notifier to the two players regarding the stakes of that particular round being played. The doubling dice as given the name has 6 face, numbers following 2,4,8,16,32 and lastly 64. The beginning of the game sees the doubling dice being placed on the midpoint of the board which is known as the bar. It is upto to either player to raise the stakes and this should be in agreement with the opponent, if the opponent declines, they must withdraw from the game.

The player that accepts these stakes sees the doubling cube on their side. If the opponent drops the doubled stakes, they lose the game at the current value of the doubling cube. For instance, if the cube showed the number 2 and a player wanted to redouble the stakes to put it at 4, the opponent choosing to drop the redouble would lose two, or twice the original stake.

As with most traditional board games, there is always a group of additional rules that one can use to possibly improve their game.

The aim of the game is always to take the risk of making moves and doubling up, this is how we can bear off all the backgammon pieces, now these rules are inplace to give an edge to the game and to help speed up the play.

Backgammoned: I this instance, the losing player must not have moved any pieces off the board, or a piece is still on the bar or the opponents home board.The lsing player loses by 3 times the value of the doubling cube, giving the game urgency.

Backgammon Variants Across the Globe

Considering very much like chess, backgammon is an incredibly popular traditional game that varies through generations and nations across centuries. These often involve a change in starting position, adding rules or restricting parts of the gameplay. These changes means the variant gameplay differs significantly as the skill required would need to be altered.

Below are some of the variants:

Acey-Deucey: A variant with a completely different starting position, this is where each backgammon piece is entered into the game and no starting pieces on the board. The game also gives high significance to the 1-2 roll, very much the same significance as rolling a double, i.e 2-2 or a 1-1. The game actually originated from the US military force with personnel playing whilst on missions.

Hypergammon: A variant that again has a different starting position, backgammon pieces are placed on points 22,23 and 24

Nard: A variant that involves the game being started from the 24th points, requiring every piece to move through this particular point. Nard Backgammon actually originates from large parts of Persia, in moderns day geography, this translates to the large parts of the middle east.

Nackgammon: This variant again differs in starting position, the inclusion of 2 additional backgammon pieces on the 23rd point and a subtraction of a piece from the 6th point.

Russian Backgammon: This particular variant differs with the movement of the backgammon pieces, more significance is placed on doubles. Instead of a double, each move is very much a re-double, i.e instead of ‘2’ the doubling cube would be positioned to ‘4’. As given by the name, this game is very much played in large parts of Russia and parts of northern Europe.

Coan Ki: Coan Ki is a backgammon game variant based in Asia, the game is heavily popular in mainland China

Portes: Again a similar variant to Plakota and also popular in Greece

Tavla: Often includes on 2 dice, played without a doubling cube, originating from Turkey

Dutch Backgammon: As given by the name, this is a popular game amongst the Dutch, the game involves all 15 pieces making their way onto the opponents half, before any backgammon pieces progressing any further. The player cannot claim the opponents piece until after 1 piece is in the opponents half.

Backgammon boards have been made in ways to benefit the players and improve the comfort of the game in the modern day. The game is often preferred on leather velvet partly due to the smoothness of the transition of the backgammon pieces from point to point make the game play alot more smooth, without damaging the board itself. As visible by the image on the right, the inlaid leather points give no difference in height between the two surfaces. 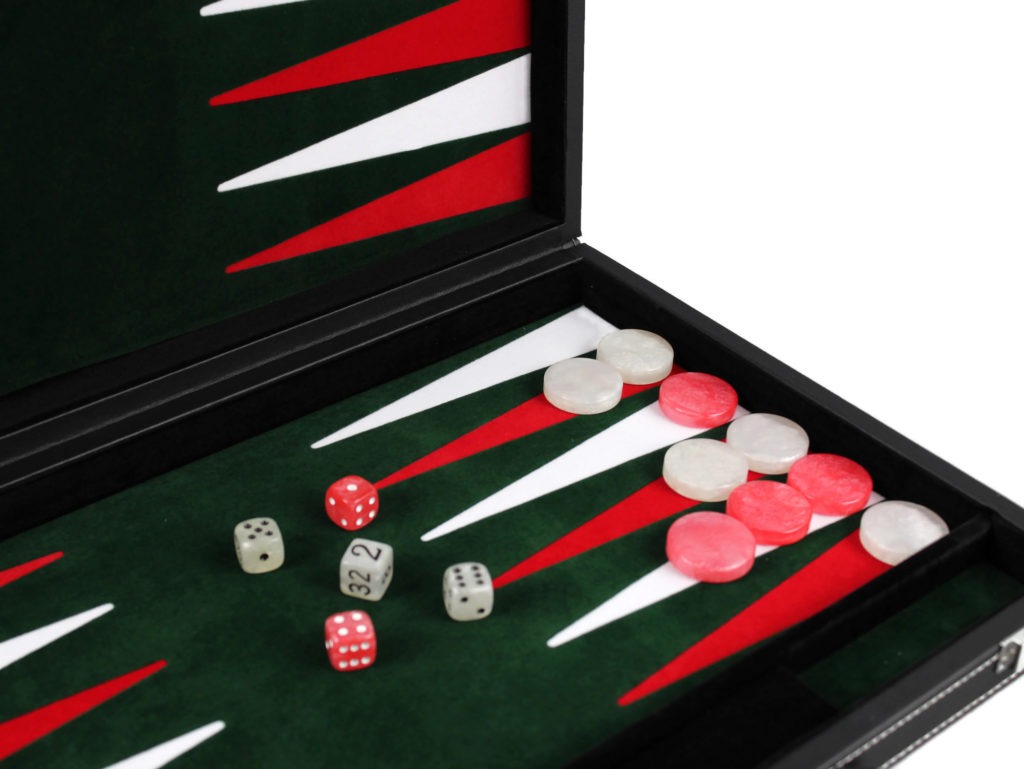 The inclusion of a complete set of dices allowing all variants of the wonderful game to be played. We completely realise that many will have their own way of playing and ensuring the boards are well adapted for every game is highly important. Therefore all backgammon boards should include 4 regular dice(2 of each colour) and 1 doubling cube ranging from 2 to 64 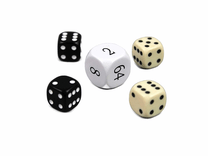 Dice shakers have also become an integral part to the game. Although most backgammon board don’t include a set of dice shakers, it is rather preferred for both opponents to hand a dice shaker each. Dice shakers are often matched in colour to the skin of the board, ofcourse these can readily be purchased as an additional extra. This prevents the bias of dice rolls and ofcourse, No Cheating! 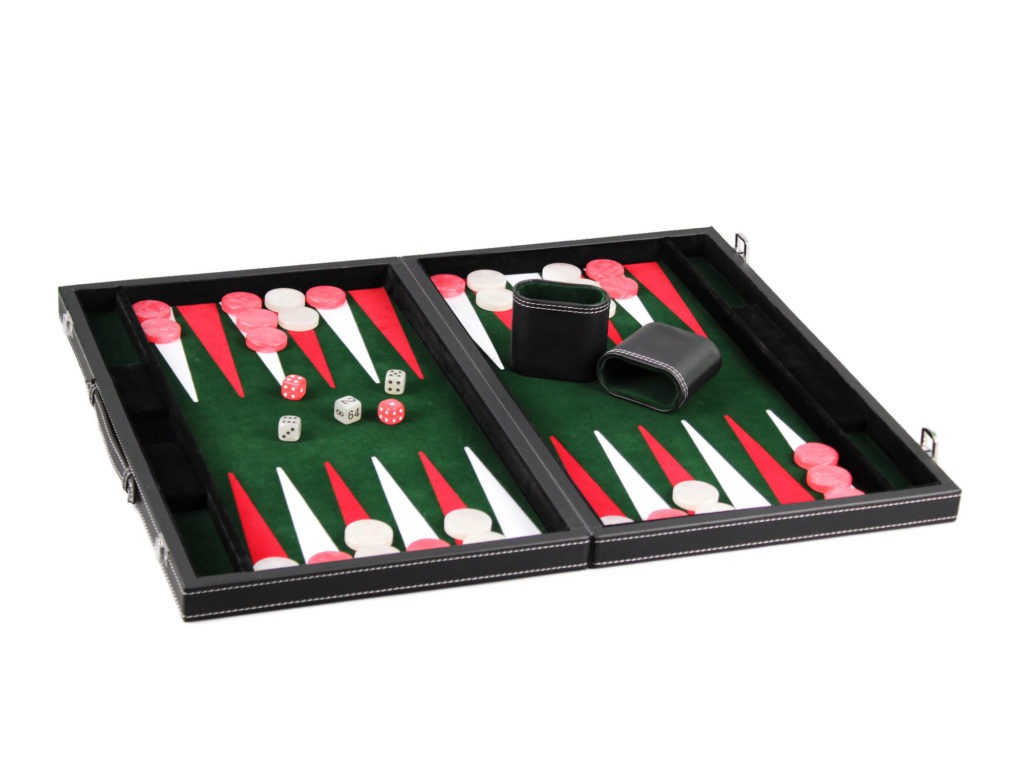 Side racks are again a rather efficient incoroporation to most backgammon boards, unfortunately this is not always feasible option depending on the type of backgammon board crafted. The side racks are incredibly useful in keeping the backgammon pieces safe whilst playing the game and preventing the pieces from shaking constantly when the game is all done and dusted. 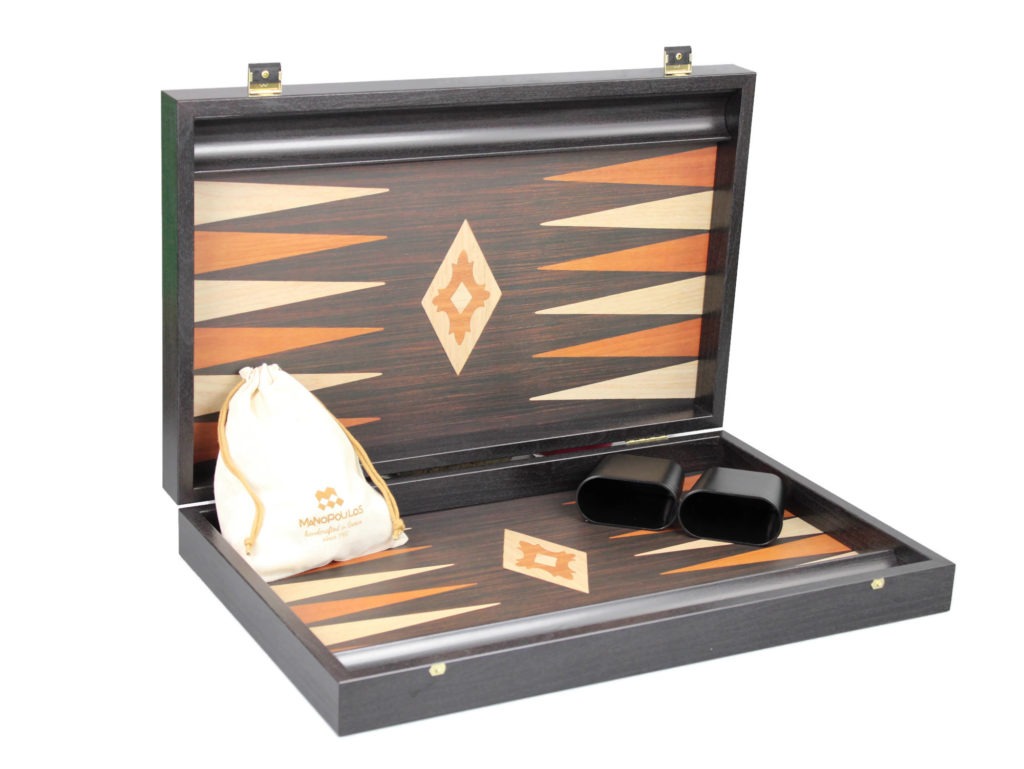 Travel facilities are well incorporated into modern day backgammon sets, manufacturers crafting a various number of sizes. Ofcoure we are all aware that these backgammon sets have a tournament size of 21″, however a majority of recreational players much prefer smaller boards, in particular travel boards that they can easily carry on holiday or to their desired destination and still enjoy a game of backgammon. These board come with handles which makes the travel purpose a lot easier and much more convenient. 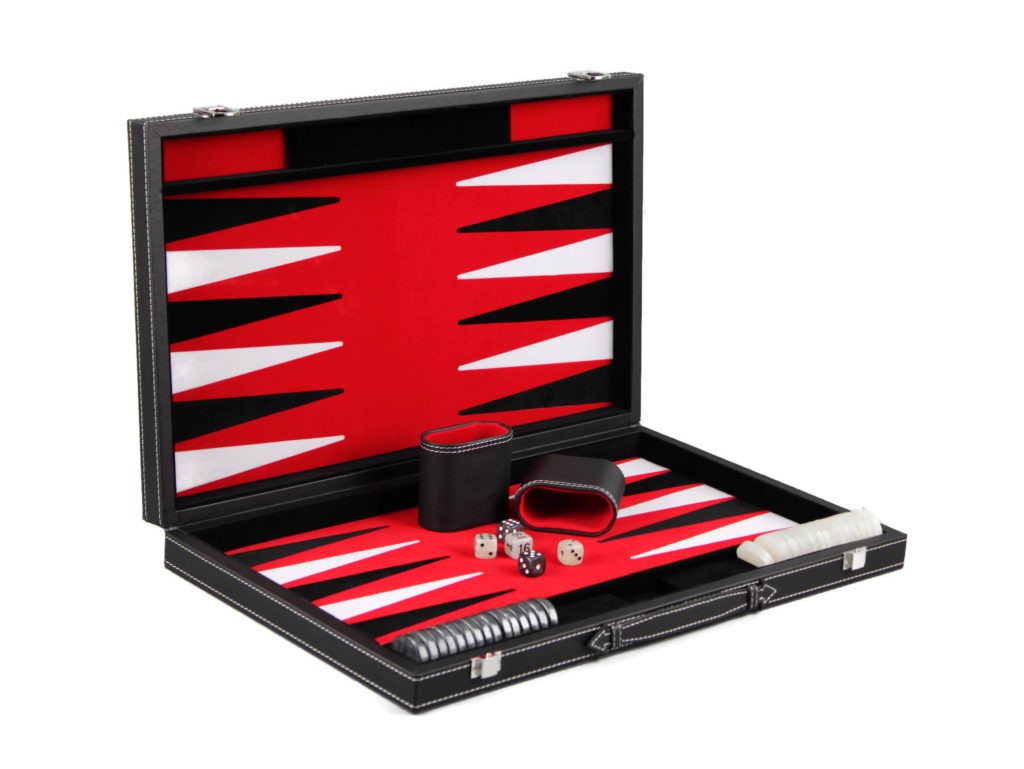 Modern day backgammon board have somewhat become a lot more sophisticated than what we had in the past. A large portion of what customers prefer is very much the travel range of backgammon boards. convenience is the main factor along with the compatibility of keeping the set safe. In the current market the popular type is ofcourse the foldable variants boards, manufactured primarily from wood and leather. The more preferred material is ofcourse leather, however leather is a wonderful material that gives a smooth and easy finish. Hand crafted boards, very much originate from India and take upwards of 4 months to try the wood and carefully craft. The handcrafted boards are more aesthetically pleasing and for those who appreciate well made crafted board. Each backgammon point lined up with precision, each dice piece carved with manual dexterity and intricate traditional techniques.

All of our boards are carefully packaged with a complete set of doubling dices, allowing you to play any variant wherever you may be. We have a fantastic range of matching doubling dices and regular dices, sized up and compatible with the backgammon pieces and the board itself.